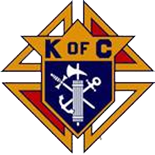 The Knights of Columbus is an international fraternal and service organization for Catholic men.

The Msgr. James H. Willett Council # 7847 was founded in 1981, named after Monsignor James Willett, who was one of the early Pastors of Saints Peter and Paul Catholic Church in Hopkinsville. The Msgr. Willett Council  works closely with  Sts. Peter & Paul Parish, providing funds and a tremendous amount of volunteer manpower for various projects.

Recognizing the upcoming beatification of Fr. Michael J. McGivney, the Knights of Columbus will be giving away two coins: an 1892 half dollar coin commemorating the 400th anniversary of the voyage of Columbus and a 1992 half dollar coin commemorating the 500th  anniversary of his voyage. Entry forms are available in the narthex and may be returned either by mail or by being placed in the offering basket. There is no cost to enter, although donations will be accepted. We ask that there be only one entry per person. Donations along with entries can be made at the following internet address (although entries without donations will need to be made via paper form).

For more information contact the Grand Knight Tom O’Hagan at
270-348-2322 or kofchopkinsville@gmail.com